tlife is identical to Life in all transitions, save for two:

Although many patterns from Conway Life still function identically in tlife, some do not; for example, the blinker dies in tlife, and the beacon evolves into an 8-cell still life. Conversely, some patterns from tlife work in normal Life, but some do not.

The glider exists in tlife, and there are two other basic elementary spaceships: a slightly bigger c/4 diagonal called ant and a c/5 orthogonal (the T-tetromino, usually called simply T).

Alongside these, other elementary spaceships have been discovered. One such spaceship, which travels at c/2 orthogonal (period 4), is dubbed the disemiMWSS, referencing the fact it looks like two middleweight spaceships interacting with each other; there is also a skewed variant. There is also another c/2 orthogonal spaceship that evolves from a phase of the queen bee, which has several minor variants. Other important spaceships include chains of interacting Ts, a small 2c/6 orthogonal ship, and a small-to-medium c/4 orthogonal ship. There exist eaters for the glider, T, and ant, as well as for the queen bee ship and its variants.

The only named spaceship other than the glider known to function in both CGOL and tlife is the crab; however, several other, unnamed c/4 diagonal spaceships work in both rules. All known spaceships that function in both B3/S23 and B3/S2-i34q travel at a velocity of (1,1)c/4.

There is a common statorless rotating period-160 oscillator that often evolves from (what would, in normal Life, be) a loaf predecessor or a honey farm predecessor. Multiple copies of this oscillator can be combined to form interesting patterns such as guns, higher-period oscillators, and glider or T duplicators. A single copy can also reflect a glider or T, or convert it into the other. There is also a somewhat similar period 33, several p20s based on a failed replicator, a p14 shuttle, small rule-specific period 3, 4, 5, 6, and 8 oscillators, and an infinitely extensible family of oscillators consisting of replicating signals traveling up and down two diagonal lines of connected blocks. Recently, p4 sparkers have been found, allowing p16 T-hassling oscillators. Combinations of lower-period oscillators may lead to p12s and p15s; however, no examples have been explicitly constructed.

As mentioned above, multiple copies of the period 160 oscillator can interact to form guns. There exist guns for the glider and the T consisting of only two copies, as well as two double-barreled T guns. There is also a gun for the ant consisting of 3 interacting p160 oscillators. By combining multiple basic guns, larger guns have been formed for the c/2, 2c/6, disemiMWSS and skewed variants, as well as pairs of interacting T's. A period 231 T gun is also known, using an over-unity reaction supported by reflectors formed from the p33 oscillator.

Several puffers are known, all traveling at c/2 orthogonal and using one of two known engines: one or more B-heptominoes escorted by at least two disemiMWSSs, or a Schick engine-like tagalong to a pair of disemiMWSSs. These engines can be perturbed by still more disemiMWSSs to form rakes for the glider and the T, as well as presumably for other spaceships.

A sawtooth has been constructed, Sawtooth 1761.

Various rules similar to tlife have been constructed.

This rule is commonly known as "tHighLife" or "Thigh Life", due to it sharing a B6 transition with HighLife.

This rule is commonly known as "tdrylife", taking its B7 from DryLife.

Unlike DryLife, it is not explosive, and has a lot of very interesting patterns. The only two relatively common oscillators are the cap and the toad, neither with a usable spark, resulting in no guns having been discovered so far (as opposed to the well-known rakes).

Many interesting spaceships have been constructed in this rule. For example, there is a naturally occurring 2c/23 orthogonal spaceship involving the T trying to escape a pre-beehive. AbphzTa used this spaceship to create other patterns moving at this speed. A T forward rake was also built using known reflections for gliders and Ts when colliding with the 2c/23 spaceship.

A c/2 orthogonal spaceship based on 2 B-heptominoes has been seen to occur naturally. 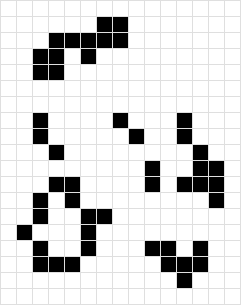 It has a ?c/240 diagonal glide symmetric pond puffer, which is actually the century. It parallels the R-pentomino based 9c/28 orthogonal pond puffer from DryLife. No spaceships have been made from this as of yet. 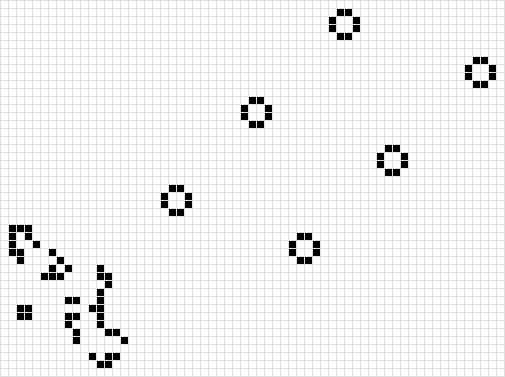 Most interestingly, there is a (2,6)c/21 (slope 3) ship puffer. This can be stabilised into various interesting patterns, such as a two-engine knightship. Also, Alexey Nigin has created a quadratic growth pattern which uses oblique spaceships to create pond puffers, based on a reaction discovered by Rhombic. A much slower quadratic growth pattern was discovered later by Rhombic, based on the synthesis of pond puffers with a T and a pond.